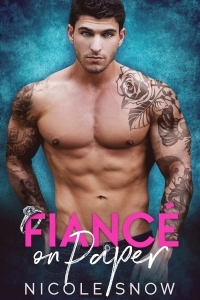 ON PAPER, IT'S PRETEND. BUT MY HEART KNOWS WHAT'S REAL.

His proposal came in a little black envelope with thirteen unlucky words:

You still owe me that favor, doll, and I'm cashing in.

In a normal life, I'd never get hitched to Calvin Randolph. Not with his heart-stopping blue eyes, infamous player reputation, and an ego bigger than the part of his anatomy he loves boasting about the most.

Been there, done that. All except the last part, which he's left to my shameful imagination for seven years apart.

Of course, the fake fiancée contract I just signed is anything but normal. Neither was the tragic day our schoolyard romance died, when he made an unspeakable sacrifice.

He saved my life. He paid a terrible price. Now, I owe him big.

He's come to collect in make believe: the blushing lies, the sideways glances leaving me breathless, the teasing kisses every time his teeth grab my bottom lip in front of the world.

It shouldn't be this hard.

It's just pretend. It's just a few weeks. I can totally resist the demanding, cold, obscenely handsome man he's become.

We have our rules. But the simple one I kept to myself might be harder: don't fall in love.

I already did that once. I know the risks. I won't let it happen.

Because if his charm steals my heart again, if I let him go all the way when his lips trace scary promises on mine, this paper engagement becomes real enough to ruin us…

Alpha male heat advisory, emotional powder keg, and hard won Happily Ever After inside! This is a standalone full length novel with no cliffhangers. Discover the fire and mystery Wall Street Journal bestselling author Nicole Snow brings to romance!

The Author / Publisher advised that this title was available for $0.99 (or local equivalent), discounted from $2.99 on 7/1/2017 at the following retailers: